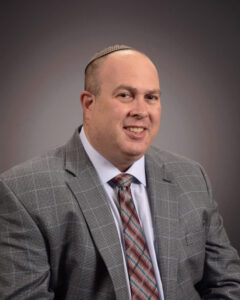 Hazzan Randall Levin enjoys leading the congregation in prayer and song on Shabbat, holidays and special occasions, and serves as a teacher, mentor, and resource for congregants of all ages. In addition to serving as the congregation’s music director, the Hazzan is also charged with leading FHJC’s outstanding b’nei mitzvah program. Prior to coming to Forest Hills, Hazzan Levin served as the Cantor at Temple Beth El in Rochester, NY and at the Highland Park Conservative Temple Congregation Anshe Emet in Highland Park, New Jersey. Hazzan Levin holds a master’s degree in Sacred Music and Liturgy from the Jewish Theological Seminary’s Miller Cantorial School and College of Jewish Music, where he was invested as a Hazzan in 2014.  At the Seminary, Hazzan Levin was the recipient of numerous awards and scholarships, and pursued curricular concentrations in Jewish liturgy, worship theory and ritual practice, culminating in his thesis work, “Hazzanut as an Extension of the Rabbinic Mind.”  Hazzan Levin has taught and lectured throughout the New York Metropolitan Area on a wide range of topics, including spirituality, emotion and meaning in synagogue music, public versus private prayer, the social function of synagogue song, and Hassidic influences in synagogue music.

Originally from Akron, Ohio, Hazzan Levin attended Beth El Congregation, where he sang in the Beth El Synagogue Choir under the tutelage of Hazzan Stephen Stein. Hazzan Levin received his Bachelor of Music in Vocal Performance from the University of Akron School of Music before completing his graduate studies at the Cincinnati College-Conservatory of Music. Hazzan Levin is a past Fellowship recipient at the Aspen Music Festival, where he performed a leading role under the baton of legendary New York City Opera maestro Julius Rudel.  He has appeared professionally as a soloist in stage and concert productions in the United States and Europe, in addition to teaching private voice lessons. Hazzan Levin and his wife Emily reside happily in Forest Hills with their two sons, Henry and Michael.